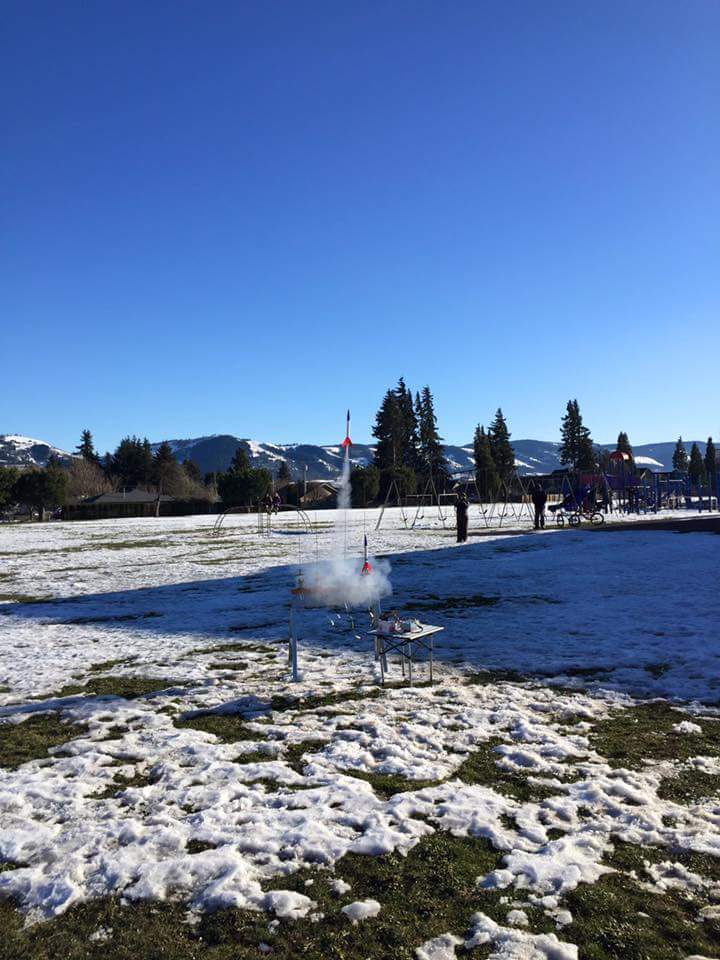 The rocket building class was fun. We had new people attend along with fellow club members. The launch weather at West-side was breezy, however we used one of the school buildings as a wind block and was successful at getting all of those rockets that were built launched, successfully. We had one interesting rocket liftoff and carry the launch rod with it to a good height. The rocket returned with no damage.

We did have three that did acquire a thermal and land in some trees. Hopefully they will descend from the tree tops soon. Happy New Year:-)

The December 18th morning was snowy and cold; however the launch did continue to go that day. Myself and Daniel Peirce toughed it out and I set up the wireless launch system that my fellow friend Bill Bowman from the San Diego Rocket Club (DART 317) had made for me and we love using it. It has a frequency hopping capability so there is no interference and it has a range of up to 500 feet. Daniel Peirce brought out his mid to high powered pad that utilizes a cymbal stand as its base and is a very sturdy base at that.

Weather wasn’t too bad. The snow was helpful with the rocket not taking too much of an impact on the landing, however it did require for us to make sure to dump out any snow the rocket may have ingested on the landing within its body tubes. We had a Snake Jumper Drag race and both rockets lifted off of the pad at the same time. My snake jumper rocket landed the closest to the pad. Both recovered safely. They were launched on Estes B6-4 rocket motors.

It did warm up just a little bit but most flights were successful. Daniel had two good flights with the Mad Cow Bomarc rocket. The first flight was on an Aerotech 24mm reload F12-4J motor. It took a little bit to build up thrust and the 4 second delay seemed a tad long. The parachute luckily deployed in time enough to have the rocket recover safely in the snow. The second flight of the Bomarc was on an Aerotech E18-4W reload. The rocket lifted off and appeared to be flying and arced over and landed a bit harder. Unfortunately during the preparation of the rocket Dan forgot to place the engine retainer cap on the rocket, so during the recovery portion of the flight, the motor ejected out of the rocket. The rocket still deployed its recovery chute. One of the strap on booster separated and there was some nose damage. I am sure it will look just like new after Daniel repairs the blemishes. https://youtu.be/cFt0vr7qOz0

Making sure to stick to a pre-flight check list tailored to that rocket will help alleviate this and no matter how experienced you are, a checklist will always help. I launched the Flis-Kit rocket called Deuces Wild. It’s my second attempt to get the angled two motor rocket to launch correctly on two motors. The good thing about the design is in case only one motor lights, it will still fly straight up. I tried the old fashioned process of using a flash bulb and thermalite. The clip whip system I used last time with Estes igniter did not work. I have quite a few of the Davey Fire flash bulb systems which can be used for recovery with an altimeter or other ideas.

Needless to say, even with the impressive flash and seeing the thermalite work, one B6-4 ignited before the other one and it lifted off still fine just with a little less thrust. The rocket deployed its parachute during its quick decent. The balsa nose cone did get a little bit of damage; however it can be quickly repaired and will be launched again hopefully with better success. Daniel Peirce built two of the Estes Renegade rockets. One was built just a tad different, but both are impressive and he decided to have a drag race with them on D powered motors.  The Renegade is a newer designed than the kit called the same name back in the 80s. The newer kit requires much more assembly.

The rockets went up straight and recovered just as expected, unfortunately one ended up on the power line close by: We all wanted to try and retrieve the rocket, but one of the number one rules about safety is to NOT attempt to retrieve any rocket from power lines. The correct thing to do is to contact the power company and inform them of what occurred. They were contacted by Daniel and the following day, it was retrieved by the power company and returned to the owner: The rocket will be ready for another launch. The last rocket of the day was the launching of a Quest Stiletto rocket: The Quest Stiletto rocket looks very similar to a Shrox rocket design that was popular in the late 90s and was launched on D powered motors. This particular kit is launch on 18mm motors. It does require to be built properly of during flight the rocket will tend to spin. This time it was launched on a C6-5.