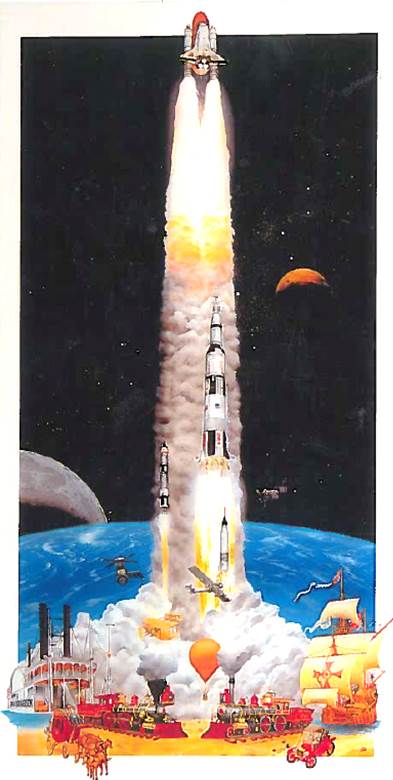 I grew up in an area not far from the Johnson Space Center when the race to the moon was in full swing.

The hobby of rocketry caught my attention when I was given a model of the Estes Icarus kit during my 7th birthday and soon after I joined the NASA Houston rocket section #365 and I was a NAR member.

Later on I got interested into other things and joined the military.  After returning from Desert Storm, I thought that I would get back into the hobby.  That is how I met Kevin Funk.  He owned the company called Discount Rocketry.  This was in 1991 or 1992.  I have been hooked in the hobby ever since.  The people in the hobby are very interesting and techno geeks and I am always learning new and interesting things.

Kevin Funk unfortunately passed in 2004.  He did a lot for the hobby and is sadly missed.

Kevin was the editor of WARP 9, the NAR Section Newsletter for San Diego. Under his editorship, the WARP 9 won the Rockwell Newsletter Trophy for being the best NAR newsletter in 1993.

His ready wit and opinions made him quite the character. He was a gifted graphic designer.

He was all these things and much more.  Unless you met Kevin, you would not realize that he was confined to a wheelchair due to muscular dystrophy.  Kevin suffered a stroke.

Kevin was a good friend.  He was responsible for the final design of the NARAM 34 meet patch

Kevin could no longer build rockets by the time I met him. He continued to regularly come out to the launches at Fiesta Island and other launches with the help of his dad or friends transporting him to the launches.

Kevin left behind his humor in the articles that he submitted to NAR for the Sport rocketry magazine and also in manufacture articles for the magazine on top of his adult humor in the Warp-9 Newsletter.

As an example, the following is from an article that he wrote for NAR in the March/April 1996 Sport Rocketry magazine.  He wrote 13 articles called “The Unstable Rocketeer”.  The one below is one of them that I thought I would share.

“The Unstable Rocketeer by Kevin Funk”

A few issues back I wrote about that peculiar lot of rocketeers known for collecting anything and everything having to do with this hobby- the dreaded” rocket collector”. An equally intriguing group of rocketeers finds fulfillment by participating in NAR sponsored competitions.  Welcome to the world of the Big Time Competitor (BTC), where people actually use and understand the metric system and talk of “thermals” without even thinking about underwear.

Most everyone enters their first contest with some trepidation.  It’s unsettling to stand at the “check in” line with your streamer duration model – usually an Estes Zinger streamer kit- and then see the guy next to you unfurling a 30-foot streamer made from some red, plastic space-age material that has been folded into neat accordion pleats that allow it to fit into a rocket even smaller than yours!  As the Big Time Competitor neatly folds his streamer, he notices you and your Zinger and offers a polite nod and a subdued, “Hey, how you doin’?”.  You sheepishly grin and look down at yourself to make sure this really isn’t one of those dreams in which you end up at school in your underwear.

Don’t worry.  Your feeling of self-worth will improve as the contest day wears on and you see the BTC’s fancy streamer fail to deploy and his fragile, streamlined rocket shatter as it impacts on the ground.  Hearing him swear, you’ll realize that despite your differences you do, indeed, speak the same language.  You’ll hold your head, and your Zinger, a little higher now as you stride back to your car to prepare for the next flight.

Rocket competitors aren’t like you or me.  What we mere mortals count on to get us through each day – luck- is disdained by the Big Time Competitor (although I have yet to see a competitor, bigtime or otherwise, refuse a first place finish simply because they were lucky!).

How best to hold luck at bay? With science, of course!  These guys have calculations to determine everything from body tube thickness to wing dihedral (that’s “angle” to you and me) for every rocket or glider that was, or ever will be, built for competition.  It would seem that the ideal competition for Big Time Competitors wouldn’t involve any flying at all- winners would be selected based solely on how closely they had followed prescribed theory and design in building their models!

Speaking of building, another character trait peculiar to Big Time Competitors is their knowledge and use of the metric system.  Rather than measuring in inches, they prefer centimeters.  Instead of weighing  in ounces, they prefer grams.  There seems to be something decidedly un-American about this.  The United States is proud of its system of weights and measures, only allowing metric measurements to be used in areas where whiny foreigners may be exposed to them – airports and border crossings, for example.  I suppose it serves Big Time Competitors well when they enter into international competition and can speak the same lingo as their geeky, foreign counterparts, but here at home their use of metric measurements can only be construed as nose thumbing the American way of life.

Just as Big Time Competitors rely on science to guide them in designing their rockets, so too do they rely on the Pink Book to guide them in flying their rockets.  The Pink Book is the NARs official contest rule book and is committed to memory by the Big Time Competitor.  This is actually a good thing because it saves you and me the trouble of even owning a Pink Book let alone schlepping it to the contest!

Unlike legal and medical professionals who charge a fee for dispensing information, the Pink Book authority (or “lawyer”) will offer you this opinion for free, usually without you even asking for it.  Don’t be intimidated!  Even though it’s likely you’ll have no idea of what the “lawyer” is talking about, you can contradict his ruling by simply asking the opinion of another Pink Book lawyer on the scene.  Competition rules are vague and incomplete, so rarely will two Pink Book lawyers share the same opinion on a particular rule.  While the lawyers verbally battle it out and lose track of time, go ahead and fly your Zinger again to add to your Streamer Duration total.  And as any Big Time Competitor will tell you, with all of the hot air rising from the field, now’s the perfect time to catch a thermal for a record setting flight.

Did you ever notice there are not any good jokes about model or high powered rocketry?

Sure everyone has an anecdote or two they can tell about the hobby, and we are all pretty funny when we are on the range insulting each other’s rockets, but I have yet to hear a cut and dried joke in the vein of, “hey did your hear the one about.”

In an effort to correct this sorry state of affairs, here’s a brief primer on how to write and tell a joke.

Another difference between a comedian and an Uncle Sid is that a comedian wont explain a joke if the audience doesn’t get it.  This is a vitally important point to remember as you embark on your journey of rocketry joke writing career.  Never stop to ask, “Don’t you get it?”  This will be an especially difficult trap not to fall into if you are writing the joke yourself- the absence of laughter at the end of your joke is a void you’ll want to fill quickly, but don’t fill it by jumping in to explaining the joke.  Simply move on.  And quickly!  (You’ll also come to learn that the silence you endure after telling a lousy joke is just as stomach wrenching as the silence experienced between an ejection charge failure and impact.  Rest assured, however, it’s easier to re-write a joke than it is rebuild your scratch-built Vostok. J

The easiest thing to do is simply rework an old joke, adding new terminology.  Let’s start out with a Skill Level 1 joke: the light bulb riddle.

Question:  “How many (blank) does it take to change a light bulb?

By simply reworking this riddle to reflect the characteristics of your target audience, rocketeers you might come up with this:

Q: How many NAR members does it take to change a lightbulb?

A: Six.  One to screw it in and five to tell him or her there’s a better way to do it.

Not forgetting our high power friends, you could rework it this way:

Q: How many Tripoli members does it take to change a lightbulb?

A: Just one, but two others will see the bulb and socket and make scaled up versions of them.

Now that we are on a roll lets not forget the Modroc manufacturers.

Q: How many Modroc companies does it take to change a lightbulb?

A:  One, but allow at least 8 months to 2 years between the time they announce the change and the time they actually do it.  (Note: a nice added touch here would be to add, “And for all the time you’ll be kept in the dark.”).

Get the idea?  Okay, what about the classic fly-in-the-soup gag:

“Waiter!  What’s this fly doing in my soup?

This can easily be reworked to impress the folks sitting at your table at next years NARAM banquet.

“Waiter!  What’s this Mosquito doing in my soup?”

“That’s not a Mosquito sir, It’s an old Centuri Two-Bitz.”(This might not sound funny to you, but remember I said to tell this at a NARAM banquet!  These folks will be slapping their knees  for hours over that one, trust me J

Finally, don’t be afraid to be a little mean spirited in your joke writing.  After all, there’s a grain of truth in every joke no matter how biting it may be.  For example:

Q: How can you tell when a lawyers lying?

A: When you see his lips moving.

A few simple phrase changes here and you’re ready to insult almost anyone in any profession (or in your case, hobby).

Q: How can you tell when a rocketeer is lying?

A: Whenever he or she says, “Sure I checked the CG, And the CPR, too!”

Q: How can you tell when a high power enthusiast is finished launching for the day?

A: You can hear them say, “Geez, I’ll have to take a shower tomorrow morning!”

Q: How can you tell when a columnist is running out of ideas?

A: When he starts writing columns on “how to write a joke”. J

Ode to Kevin Funk My Friend 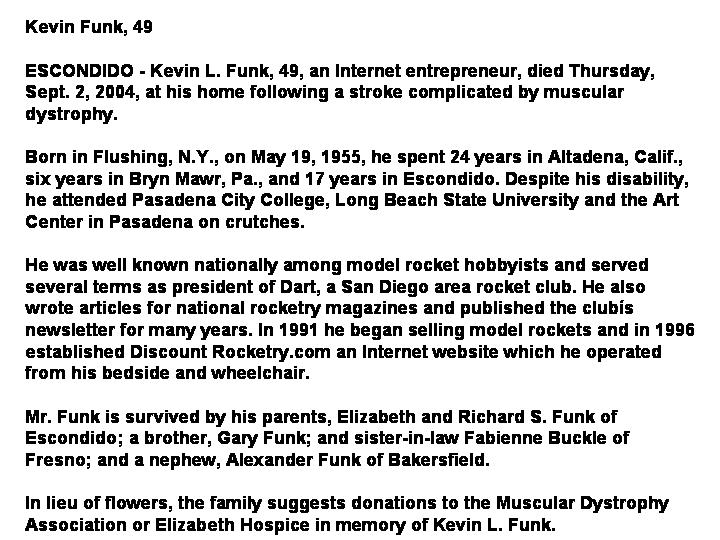